Dear readers, are you ready for the last part of the Movies for Fashion Inspiration series?

The Devil Wears Prada (2006) is a delightful sort-of comedy about a bright young girl entering the fashion magazine world as an assistant of Miranda Priestly, the imperious editor of a glossy magazine called Runway. With a cast like Meryl Streep, Anne Hathaway, Emily Blunt, Stanley Tucci, Adrien Grenier and a huge line of high end designer clothes that made us drool incessantly, this movie is sure to make a stand. In short, it is a movie about fashion as a serious business that in the end shouldn’t be taken so seriously. 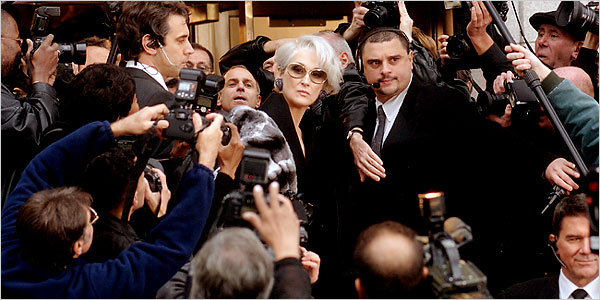 Bringing Up Baby (1938), starring Katherine Hepburn as a young heiress, Baby, her pat leopard, and Cary Grant as an absent-minded palaeontologist. This old school comedy is an absolute delight, we could watch it over and over again! And if you’re in the mood for some Old Hollywood glamour, be ready to be marvelled by Mrs Hepburn’s wardrobe.. And let’s not forget the little neglige that Cary Grant was donning! If you haven’t seen it, than this is definitely a must.

Almost Famous (2000), a movie about rock bands in the 70s, their groupies, the music journalists and everybody else that followed them on tours. Penny Lane, played by Kate Hudson, is a free spirited girl enjoying life and an amazing hippie chic wardrobe that had everybody lusting for it – John Lennon sunnies, an Afghan trimmed suede jacket, lace crop tops, knee high boots, etc. It is said that one of the best parts of it is that there are no platforms on show the entire movie (the platform which is basically whatever everybody thinks of whenever 70s fashion is mentioned). Anyway you look at it, Almost Famous is a slice of 70s fashion heaven. Blade Runner, the 1982 sci fi masterpiece, which was actually a flop at the time of its release, only to be recently named the greatest sci fi movie of all times. Here’s a nice turn around! It was directed by Ridley Scott, with Harrison Ford, Rutger Hauer, Daryl Hannah and Sean Young playing the main characters. With Blade Runner cited as an inspiration for the many Fall Winter 2012 dark and edgy collections, from the likes of Fendi, Versace, Chanel, Vivienne Westwood and many more, it was impossible not to included in our post!

Breathless, the Jean-Luc Godard’s 1960 French new wave masterpiece, featuring Jean Paul Belmondo and Jean Seberg. She portrays a beautiful young lady, with a cute pixie hair cut, wearing breton tops, chinos and ballet flats, a style that now has become, well, iconic. Rumour has it that the director instructed the actors to just dress in their clothes, with whatever they think their characters might wear. It turned out it was a marvellous idea, wouldn’t you agree? 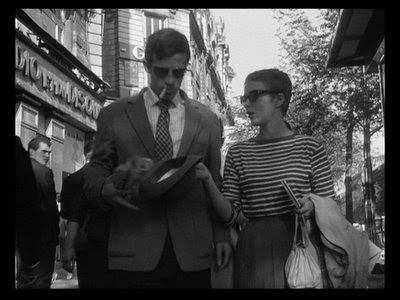 Pretty Woman, the 1990 fairytale, starring Richard Gere, Julia Roberts and a wardrobe worthy of a princess! …well, except a few outfits at the beginning of the movie. Remember the little polka dress from the polo scene? Oh, 20 years later and it’s still one of our favourite looks! Do you have a favourite?

Grease  from 1978, a film that I don’t think needs any further introduction. We simply love this musical! We love the singing, the dancing, the romance, the outfits, everything! And Sandy, played by Olivia Newton-John,’s good-girl-gone-bad transformation is to die for. Leather skinnies, sexy black top, killer red mules and a dance to go with it! Really now, Danny had no chance.. Here’s a glimpse of that memorable outfit that literarily made history. The Philadelphia Story (1940), another Katherine Hepburn favourite, starring along mavericks like James Stewart and Cary Grant. Besides some good laughs we enjoyed in quite a while, this movie offers a savurous portrayal of the rich and the beautiful, with  Tracy Lord (Miss Hepburn’s character), a young beautiful heiress, as the main character. Tracy parades a number of outstanding dresses and even a swimsuit, worthy of a goddess. Here’s one example, but you’ll have to see the movie to get to see them all!

The Godfather series created a world of extremely well dressed mobsters, with codes of honours and values. According to author Tim Adler‘s 2007 book, Hollywood and the Mob, The Godfather ‘changed the way the Mafia regarded itself and … rehabilitated gangsters into men of honour instead of what they really were — pig-ignorant, violent-sentimental goombahs.’ What we most liked about this movies is watching the characters transformation through the help of fashion, colours, like Al Pacino’s character, who comes as a young man from the war and turns into a war lord.